Sleep apnea is a sleep disorder where a person’s breathing is momentarily arrested during their sleep cycle. If the disorder is not treated, people with sleep apnea could experience several health problems such as strokes, cardiomyopathy, hypertension, heart attacks, heart failure, and diabetes. There are two major kinds of sleep apnea, and they include central and obstructive.

Obstructive sleep apnea is the most common and manifests as a partial or complete upper airway blockage during sleep. The severity of sleep apnea is measured by the apnea-hypopnea index (AHI). The AHI is the number of breathing pauses you experience per hour you sleep.

Conducting a sleep study allows us to evaluate your AHI.

It is rare, but the brain fails to signal the breathing muscles to breathe. The problem is caused by instability in the respiratory control center.

Who gets sleep apnea?

Approximately 25% of males and about 10% of females worldwide. However, the disorder is more prevalent where people have obesity, and structural abnormalities, for example, a thick neck, low hanging soft palate, small jaw, and nasal obstruction.

What are the symptoms of sleep apnea

How to diagnose sleep apnea

Sleep apnea is diagnosed through the following techniques.

The physician will subject you to a physical exam to check for other conditions that can increase your risk for sleep apnea For example, structural deformities and tongue position. According to the National Heart Lung and Blood Institute, your heart and lungs should also be checked.

For some people, sleep apnea is inherited. An examination of the family history can give some information. Even the risk factors, including diabetes, high blood pressure, and atrial fibrillation, could be inherited. 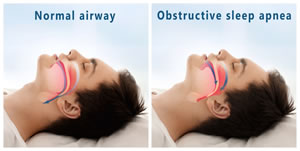 How to treat sleep apnea

The CPAP machine is useful in sending air pressure through the mask as you sleep. The physician sets the machine’s air pressure to push air past the upper airways into the lungs. The outcome is reduced snoring and occurrence, decreasing your chances of obstructive sleep apnea.

These devices normally hold the tongue in position and open your throat, thus your airway. The appliance is made by your dentist. If you suffer from sleep apnea and think you may need a sleep appliance come into North Point Dental Associates for a consultation.

The physician advises that people should get treatment for the causative factors. For example, people should get hypertension drugs if the problem is caused by high blood pressure or get their insulin/glucose controlled if suffering from diabetes.

The physician offers surgery as a means if the other systems have not worked for you. Suggested surgeries include implants, tissue removal, jaw repositioning, tracheostomy, and tissue shrinkage.

Sleep apnea can be treated by changing lifestyles. For example, regular exercise, eating well and lowering their body weight. Smoking is a risk factor so consider quitting, and treat all nasal allergies.

Reach out to us

Untreated sleep apnea causes heart failure, heart attacks, and insomnia. If the brain fails to get enough oxygen, even death can occur. If you think that you have suspected obstructive sleep apnea, you need to see a sleep specialist.